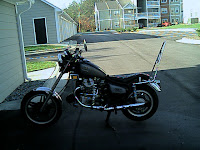 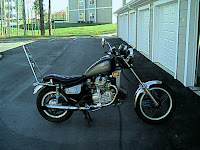 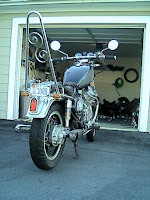 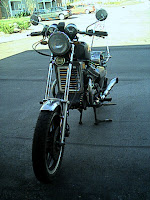 My father has always had garbage motorcycles. They were always breaking, and he was really tired of owning junk. Every time he'd get something halfway nice, he'd turn around and sell it in a few months to pay for my or my brother's college tuition. So he ended up buying non-runners and fixing them, and they were *always* breaking.

So in 2002, after saving money for a year, I bought my Dad a new motorcycle. This was the bike he was working on trying to fix at the time, which he eventually gave to me when my Magna was down for engine repairs.

I rode this bike for a while, and eventually fixed my Magna. Instead of selling it, I kept it around and used it when the weather was bad or when I needed to ride into less than savory areas. It started as a 1982 Honda CX500 Custom. Note the air-assisted 36mm front forks, the nice 2-pot caliper, the rusty headlight ears, the crash bars, the beautiful seat, the fugly turn signals, the pullback bars, and the giant luggage rack. Yeah, ugly didn't even begin to describe it.

Of course, I couldn't live with that, so I started chopping it. Check out these pages for the progress I've made and pictures I've taken every step of the way. This is truly a "cheaper chopper". I've set out to prove that anyone with a little ingenuity can build their own custom chopper for very, very little money.
Posted by ChopperCharles at 6/15/2002 06:30:00 PM No comments: