I have taught a couple of friends to ride over the years, and I've learned some things I'd like to share.

First off, there is no such thing as too small of a bike. 200-250cc is the PERFECT size for a beginner. So many people start with bikes that are just WAY too big. A Kawasaki 250 Ninja will cruise all day at 80mph -- two up. It has a top speed of 105 (115 in a full tuck with a tailwind and 3 more teeth on the rear sprocket). That's plenty powerful. It's also a very light, very low bike. It's the bike I recommend the most, it's been made for years and you can find a nice example for $1500. The ONLY disadvantage is that it has plastic that is easily damaged.

The bike I recommend the second most is the Yamaha TW200. First off, yes it's smaller. Yes, it's slower (with a solo top speed of 75mph, and even then only if you take 3 teeth off of the rear sprocket). But holy hell it's FUN. It's extremely low, and it has a 130 front tire and a 180 rear... and these are full-on knobbies!! It corners like a sportbike and will wheelie with some effort. In short: a total blast, even for a 235 lb fatass with several 100+ hp motorcycles and 17 years of riding experience under his belt.


Whether you loan a bike to your friend, or he (or she) buys her own, the more beat up the bike is, the better. Chances are it's going to get dropped once or twice. Or wedged into trees at the edge of the parking lot. Or driven into a ditch full to the brim with sticky gooey mud. Or ridden into a telephone pole.

All of these things have happened to friends of mine. In addition, the very first time I tried to ride I was trying to take a right turn and ended up heading for the ditch on the far side of the road, and then just panicked and fell over. Here's all that I learned:


However, if you're reading this you've already dismissed the MSF course, so let me get down to the meat of this post:

There are probably a million more things to consider when teaching a friend to ride, but I've found these to be the most successful. I've learned these by teaching friends how to ride over the years -- some with success, some without. These experiences have also resulted in a few amusing asides:


Okay, that's it for today!

A few years back my buddy Randall had a problem with his SV650. The clutch wouldn't disengage. He'd pull in the lever and drop it into gear, and the bike would lurch forward. It acted like the clutch cable wasn't there at all. But then a few miles down the road it would work fine again. He brought it to me, and this is what I found: 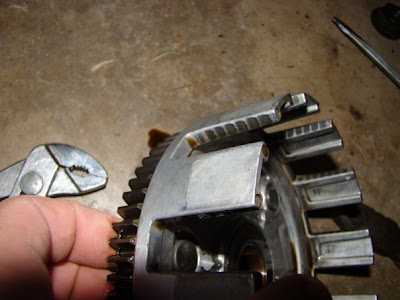 This is the clutch basket. If you look closely, you can see there are nice shiny marks on the fingers of the basket. Running your fingers over these, the shiny areas are actually indentions,  and the dull areas raised ridges. What has happened is that this is a high mileage (50k) bike, and over time gunning the throttle has caused the clutch plates to slam into the fingers, which has create these shiny indentions. They don't look it, but they're deep enough at this point to occasionally catch the clutch plates, and prevent them from moving away from each other. The plates are firmly stuck in the indention.

The correct thing to do is replace the clutch basket, and replace the clutch as well. However, the clutch in this bike was replaced less than 10k miles ago, and my buddy Randall was a grad student with no money. And since this is a blog that centers around budget motorcycle mods, here's the fix: 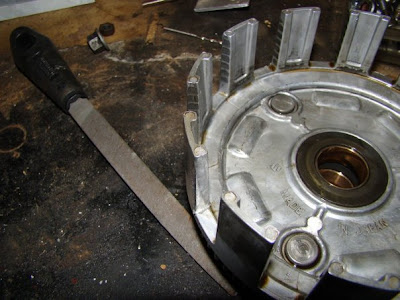 I'm painstakingly filing off material until the ridges are down to the same level as the indentions, and it's all completely smooth again. You can see I've completed one finger already, as the whole thing is nice and shiny. (leftmost finger) I did this filing for all the fingers, tossed it all back together, and was even able to reuse the clutch cover gasket. We even leaned the bike over in the grass so it wasn't even necessary to replace the oil.

Now, this fix is cheap, but there's a problem with it. It won't last forever. In fact, it won't last as long as the original clutch basket did. By filing the material down, there is even MORE slop in the clutch, which will cause the same problem to happen all over again -- and it will happen in fewer miles. So, it's a passable repair, that will probably get you another 20,000 miles. But it's not a permanent repair. Then again, nothing that has to do with your clutch is a *permanent* repair. They will all wear this way.

That being said, my V65 Magna has 40 more horsepower than the SV650, 80,000 miles, and the clutch basket looks new. Different designs and different forces at work (and the V65 has a huge spring on the driveshaft that absorbs a lot of the immediate slamming force when hammering the throttle and dumping the clutch)

Right now I'm updating the CX500 Chopper Project, slowly reformatting the old posts (from http://cx500forum.com) to this new Blogger blog. New posts will come after the old stuff is back up!

In the meantime, this is my (rather festive) dog Chopper. Yes, I named my dog Chopper... actually long before I received the title ChopperCharles by the people on the CX500 Forum. He hopes you'll come back. (actually, he just wants the hat off his head, but we can pretend)

Email ThisBlogThis!Share to TwitterShare to FacebookShare to Pinterest
Labels: Info
If you're coming here from google or from an old link, the CX500 forum is at http://cx500forum.com
I'm splitting choppercharles.com off into a blog about my motorcycle builds. The cx500forum will always and forever remain at cx500forum.com. The only thing that changed is that choppercharles.com no longer redirects there.