The V65 Magna has traditional forks, with a decidedly non-traditional internal design. Most of the forks I've worked on, when you remove the bottom allen bolt, the lower easily slides off of the tube. No fuss at all.

In theory, at least. Every now and then, you'll encounter problems. My problems stemmed from aftermarket seals which were slightly too large. When I replaced my fork seals last, the fork seals were really, really difficult to install. I used a piece of PVC , and stacked two old seals on top of the new seal, and then beat the crap out of the PVC with a 4 lb sledge. Took lots of hammering to get them in. Well, apparently all that hammering distorted the seal -- or they were just crap to begin with, because they started leaking immediately.

I'm here to tell you, if you experience this ever, STOP, and do not install that seal. If it's too difficult to install, there's a problem. And if you continue installing, the problem is going to get way, way worse. Because that slide-hammer action doesn't work very well at all when the seal is stuck in there really good. In fact, what happens is as you slide-hammer, the lower bushing expands the bottom of the upper bushing. The upper bushing has nowhere to go, because it fits tightly into the top of the fork lower. Expanding the bottom of the upper bushing wedges the bushing in place extremely firmly. No amount of slide-hammering will get the forks apart.

If this happens to you, use a PROPANE torch, and apply heat to the fork lower. You'll need something bigger than the small pencil tipped torches used for plumbing work. You'll need a brush-clearing torch with a big tip.  I used this: 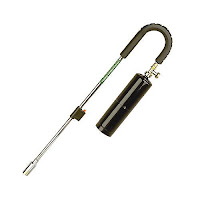 I heated the crap out of the top of the fork lower, and then after two big slide hammers (wear welding gloves  to grasp the lowers without burning yourself) the left lower popped right off. The right side needed much more heat, and instead the tube expanded enough that the lower race was able to pull right through the upper race. This required using a 4 lb sledge to tap the fork lower off, though. Slide-hammer wasn't enough.

This is what the bushings on the left fork looked like. You can clearly see how the lower bushing is jammed into the upper bushing. 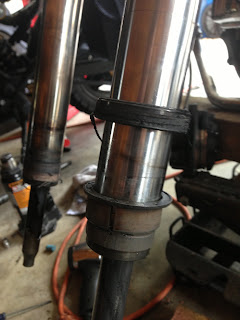 BE CAREFUL. When aluminum is hot it's malleable, and you can easily, easily damage the aluminum with a mallet. You can actually overheat the aluminum, but it requires a LOT of propane heat. Or just a little oxy-acetelyne heat. Which is why I used propane.

Once forks are removed in this manner, you're going to have to take apart the fork tubes as well. There are little plastic (pvc maybe?) bushings on the damping rod, and there's a good chance you may have melted them. Replace if they're damaged, and clean out any melty bits you find.

When reassembling the forks, I test fitted everything this time. The upper bushing fit very tightly in the fork lower, so I took some sand paper and sanded off the layer of corrosion, dirt, grime, and muck there. I did the same for the fork seal area. I didn't remove metal, just the muck and nastiness and powdery corrosion.

This time, instead of using PVC, I purchased an actual fork seal driver. I first used it to tap the upper race into place, and then to tap the seal into place. It took almost no force to install this time, and my OEM seals haven't leaked a drop.  The driver is also very nice because you can leave the fork tube installed in the triple tree. This is what it looks like: 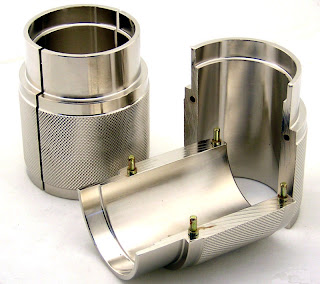 I will never install seals without a properly sized driver again. The tool was $25 and it was SO easy to use, it made the job almost pleasant.

I've had rearsets on my V65 for some time, but recently I just overhauled them, changed the mounting, and fixed some problems. While it was all apart, I figured I'd take photos and make a post. The first big problem I had is, I trashed my dented and rusty Kerker header, and installed a MAC 4-into-1 header. Because of the different design, the brake arm now directly contacted the header, so it had to be relocated. However, this same situation would occur with a stock bike, with stock collector and mufflers, so I think it'll be useful to post here. First thing I did was find some M10x1.5 bungs off of eBay, from Sin City Metal Works. They look like this: 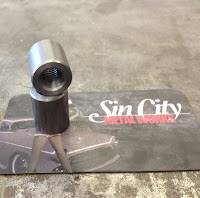 I then removed the aluminum passenger brackets, and welded these to the position where the front-most bolt is located. Like this: 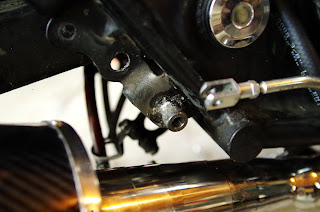 Then I drilled out the mounting hole on the aluminum bracket, so that it slides over this bung:

I also had to grind the aluminum a little bit. The aluminum was at an angle with respect to the bung, which meant anything bolted here would be cocked sideways. A hit with the grinder made it level with the end of the bung.

Here you can see the Tarozzi universal rearsets -- brake side. I got these from Fast From The Past. The set consists of left and right folding pegs and adjustable shifter/brake arms -- and nothing else. I also purchased the spacer you see there, as well as the brake and shifter arms you'll see on down the page.

Then I bolted this assembly to the bung .

I skipped a couple of steps. You can see here the rod and the clevis attachment (both from Fast From The Past). I'll bet you're wondering what that's connected to....

Well, a couple of years back I went to Vintage Motorcycle Days in Ohio, and scored a brand new, never been used Nissin master cylinder and reservoir. I welded together a custom bracket and mounted the master cylinder right where the original footpeg attached.

That piece in the middle I had to "machine" myself. It's just a piece of mild steel solid rod from Lowes, which I cut, drilled, and tapped. The linkage arm is M6 thread, and the master cylinder is M8 thread, so I created this to connect them together. Works like a charm, and it was done with a Harbor Freight drill press and a regular old tap and die set. The brackets are 3/16" thick mild steel. I cut them with a cut-off saw, shaped with an angle grinder, and then welded them together. I kept the welds on the back side so the front looks clean and nice. Painted it with plasti-dip :)

If you look close, you'll see wires coming off the banjo bolt. This is a pressure switch for the brake light. I soldered the connector on and it plugs into the wiring harness just like the stock brake light switch. This was much simpler than trying to rig up a mechanical brake light trigger. I purchased the banjo from Cycle-Recycle Part II. The stainless brake line was just hanging around in my shop. It's a little long, so I routed it a little funny so the extra line is out of sight under the motor. Works for now, I'll get a shorter line later.

The shifter side was constructed pretty much the same. I bought two M6 ball end linkage connectors from McMasterCarr and attached them to another linkage that I bought from Fast From The Past. I drilled out the stock shift arm that connects to the shifter rod, so that I could attach the rod ends. You'll also notice that I used a thicker spacer (also from FFTP). This is so the shifter clears the kickstand when it's in the up position. You will absolutely need a linkage arm that's bent like this in order to clear the kickstand. It's a very tight fit. (Alternatively you could cut the kickstand off and weld it back on near the front, but that was too involved and an offset linkage was way easier).

Combined with a set of Daytona handlebars, these rearsets turn the V65 Magna from a laid-back cruiser to a standard seating position, which allows for more control and better handling in the twisties. The "rearsets" are very mild, the seating position is neutral, your feet are directly underneath you, so it's easy to stand on the pegs when going over railroad tracks or an unavoidable obstacle -- a difficult feat with stock pegs.

Seriously, the daytona bars and the rearset (standard-set really, but still further back than the V65 Sabre) completely change the attitude of the V65 Magna. In a straight line, it's CONSIDERABLY easier to launch this way, and wheelies (unexpected or otherwise) are much easier to control, because your feet are under you and still supporting you. You're not sliding backwards. Twisties are where this setup really shines though. I'm seriously considering un-doing my lowering, because it's so much more fun now that I want more ground clearance.

This mod wasn't cheap, but it wasn't that expensive either. Tarozzi rearsets are reasonably priced, and nicely made -- although I'd opt for the raw aluminum next time. The black wrinkle-coat wears off too easily. The extra parts required (linkage rods, ball ends, clevis, spacers, etc) are also reasonably priced. This mod did however require a bit of custom fabrication, and some welding. It's not a bolt-on, but it's also not out of the realm of possibility for a shade-tree mechanic. That's all I am, after all. The biggest tools required are a drill press and a flux-core welder, both from harbor freight (around $200 for the pair). You could make do with a hand drill and a vice in a pinch, and have a welder attach the bungs for you. If you go this route, I'd recommend you bring a bolt and washer to hold the bung in place, so he can just weld it and you can go on your way. Don't forget to strip the paint first! Also, don't forget to paint the bung and the stripped area around the weld, or it'll start rusting at the first hint of humidity.

Anyhow, I hope you found this useful, feel free to comment below!

Motorcyclists have a bad reputation. Historically we've been portrayed as dirty, rowdy, law-breaking ruffians on Harley Davidsons, or as young dumb brain donors on plastic rockets, wearing shorts and flip flops and doing wheelies in traffic at 120mph.  There are countless videos of stupidity and crashes on youtube... but today I found a video that made me smile:


These are the kind of videos that change public perception. Videos that show we're not all adrenaline junkies with no thought of our own (or anyone elses') safety, or unsavory tough guys with a beer in our hands and an axe to grind.