One year since I started chopping 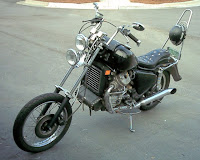 Well, the bike is really looking better and better now. I've installed a new rear fender that I got off of ebay. There was no model information or anything, it was just listed as a generic 7" wide Harley rear fender. All the other fenders I've found on eBay have been 7 1/4" wide, and that extra 1/4" made all those fenders to wide to fit between the rear frame rails. Even with the proper width fender, mounting it was no piece of cake. First off, the stock airbox was in the way to mount the fender forward enough to look good. 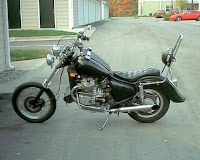 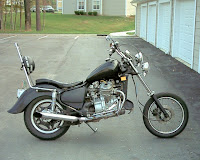 Since the airbox has the mounting points for the sidecovers moulded into it, I really didn't want to remove it. I'd also have to rejet the carbs after installing pod filters, and I have no desire to do that at this time. So, I whipped out the hacksaw and cut about 8 inches off the front of the fender. I cut the seat and fender mount from between the frame rails, and then bolted the fender between the frame, where the sissy bar mounts at the rear. For the front mount under the seat, I cut a piece of flat stock, mounted it to the bolt under the transistor ignition boxes (remember this is an '82 non-cdi bike), and then bolted it to the fender. It's relatively strong, but it does squeek and move a bit under my butt. I'm going to have to come up with a stronger front mounting method. Or lose some weight!! I can sit on the passanger section without problems too, but as this is a fiberglass fender I wouldn't want to have a passanger that weighed much more than 150lbs or so. 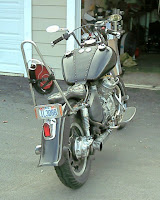 Other than the new fender (and all the rewiring that was involved), I've installed some 8" Z bars, and ran the wires for the control switches inside them. You have no idea how much of a bitch that was. I also added skull grips, new chrome mirrors, an extended chrome kickstand for a CB750, I've wrinkle-black painted the radiator covers and fork legs, added chrome wire covers to the wires around the headlight, and installed custom chrome mini gauges. Basically, I've spent a lot of time and money on her these last few months!

Fortunately, the bike is getting to be a lot closer to the picture I have in my mind's eye. A few more parts and modifications and the bike will be finished. So, here's the current parts breakdown:

Total cost of Modifications so far: $1133